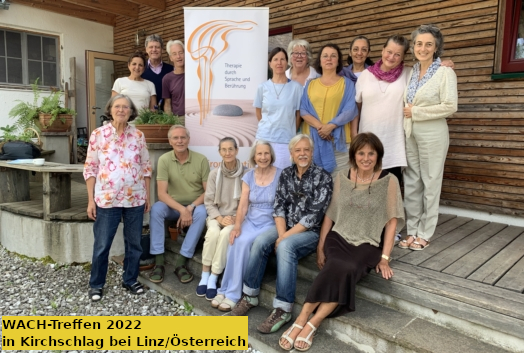 What is the WACH?

WACH is an abbreviation for German: Weltweite Arbeitsgemeinschaft für Chirophonetik.
The WACH was founded in 2008 after the death of Alfred Baur as a worldwide free association of people who have completed their training in chirophonetics and are interested in exchanging experiences, studying the basics together and further researching chirophonetics.
Since 2022, WACH sees itself as is a body of delegates from schools and national associations of chirophonetics worldwide who wish to join it. It sees its task as actively representing and defending chirophonetics as a therapeutic method in the world, as well as enabling the schools and country associations to realize this goal in practice.

Currently represented in WACH are the schools of chirophonetics from Austria, Brazil, Portugal, Italy and the Czech Republic, as well as the national associations from Germany, Switzerland, the Netherlands, Sweden, Norway, Finland, Iceland, Russia, Georgia, Argentina and Colombia and Australia.

The delegates of the schools and national associations usually meet every two years for a week of joint work and intensive exchange. Initially, Ulrike von Armansperg, Alfred Baur's long-time colleague, took over the leadership in 2008. In 2016, she handed over this task to a small leadership circle. Currently, this is composed of: Angela Assenza from Italy, Mauro Menuzzi from Portugal and Stephan Rex from Germany.

Other organizations within the movement of Chirophonetic Therapy are: